Doris Day in an Era of Slim Fashion and No Pockets 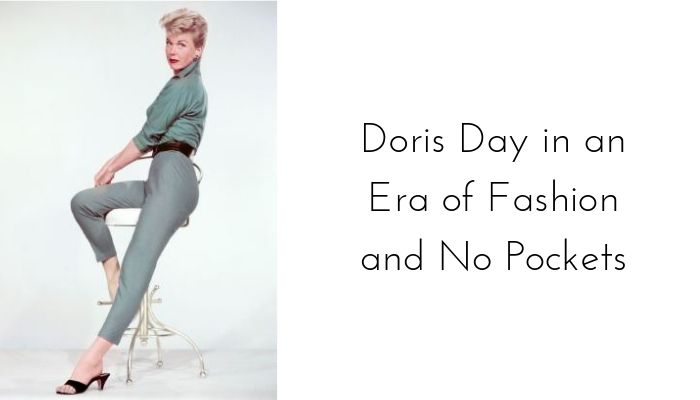 A History of Pockets

Pockets first appeared on waistcoats and trousers approximately 500 years ago.  Women didn’t wear trousers then.  Women in the 1600s wore pockets as a separate garment that hung between a petticoat and a skirt.  They could be removed and worn with different outfits.  These removable pockets carried thimbles, pencil cases, scissors, keys, spectacles and combs.

By the late 1800s, women began to rebel, and women began sewing pockets into their skirts.

In the early 1900s women began wearing pants with pockets but it was a major statement.  In 1933 Women’s Wear Daily asked their readers “Will women wear pockets?”.   A sign of the times indeed.

Both World Wars had women wearing more pants as they were working more and yes, they had pockets.

Towards the late 20th century fashion moved to flatter a woman’s body more.  Unfortunately, there was very little room for pockets.  At the same time the rise of purses allowed fashion to continue in this direction and focus on more form than function.

Doris Day showed off her form fitting (pocketless) pants in the 1960’s.

Wearing pants became a trend in the 70’s with the menswear look.  Diane Keaton wore it best as Annie Hall in the 70’s.

Now in the 21st century, technology has changed us forever.  Women don’t need pockets just for money or to hold lipstick or combs anymore.  We do, however, have something increasingly important to carry – cell phones.  They aren’t just a convenience – they are a vital part of our lives.  They are the way we communicate; they are our cameras; a way to pay for things; they are research tools, a form of entertainment and so much more.

We are seeing a growing trend in pockets everywhere from leggings and sportswear to formal gowns and wedding dresses.  Sandra Bullock wore a gown with pockets at the Oscars in 2006 and Amy Schumer wore a beautiful gown with pockets to the Oscars in 2016.   Pockets are finding their way back into clothing – but they will never completely change the evolution of fashion.

Introducing Vockets – a way for a woman to layer on pockets in a comfortable and fashionable way to any outfit they own.  We have re-invented the wearable pockets of the 1600’s.  They are larger, they are zippered, and they hold a cell phone.

I set out to create a comfortable way for a woman to carry her cell phone discreetly under a jacket or cardigan.  The holster style vest is a lightweight, slimline layering piece that you put on in the morning over a cami or blouse but it can be completely hidden under a cardigan or jacket.  You have a discreet place to carry your cell phone no matter what outfit you are wearing!!  The patented product was named  the Vest Vocket and from this one item an entire line of cell phone solutions emerged.  Come see what Vocket works best for you at https://www.vockets.com.